Spring Cleaning: What About Your HVAC System? 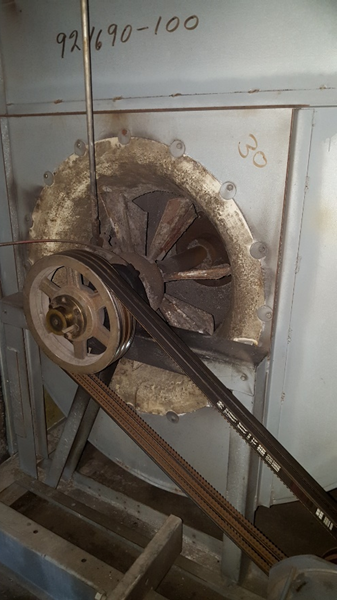 Indoor air quality complaints from employees can be quite common in office environments.  Symptoms such as red or itching eyes, cough, colds, allergies, headaches and unusual odors are some of the issues that can be reported by building occupants.  In the course of investigating contributing causes, a review of the buildings use history, inspection of the immediate complaint area and measurement of various airborne contaminants may not reveal a likely source.  This is when a trip to the air handling unit (AHU) on the roof becomes necessary.

The US Environmental Protection Agency (EPA) ended 2010 with two announcements that impact Indoor Environmental Quality (IEQ).   The first of these announcements involves polychlorinated biphenyls (PCBs) in school environments. In their press release and guidance document , the EPA is recommending the removal of all PCB-containing fluorescent light ballasts from school buildings.  The focus is on school buildings built prior to 1979 which have not undergone a complete lighting retrofit since that time.  (Note:  In 1979, the EPA banned the use and processing of PCB.)  The EPA makes these recommendations following the detection of elevated PCB concentration in indoor air at several schools where damaged PCB -containing light fixtures were present.  According to the EPA , PCBs have been demonstrated to cause cancer, as well as a variety of other adverse health effects on the immune system, reproductive system, nervous system, and endocrine system.

While this announcement is directed at schools, commercial and/or residential buildings with pre-1979 fluorescent light fixtures should also consider following this guidance to prevent exposure to their building occupants.  While replacing such fixtures will improve indoor environmental quality, there is another likely benefit:  energy costs are reduced when replacing these older light fixtures with modern, energy-efficient models.   The costs of installing lighting equipment upgrades may also be offset if there is an active incentive program offered by your state government and/or local utility such as these Clean Energy programs offered by the state of New Jersey.  This type of office or plant upgrade is a quadruple win opportunity for companies who qualify:


EPAs second end-of-2010 announcement recommends testing for radon, as January is National Radon Action Month.   Radon is a naturally-occurring, colorless, odorless gas that can impact your buildings IEQ if mitigation measures are not in place.  Radon exposure is the leading cause of non-smoking lung cancer.  Winter months such as January are the perfect times to test for radon as doors and windows generally remain closed for extended periods of time and heating equipment is in operation potentially creating a pressure differential between the soil and the buildings interior that would promote the migration of radon into the buildings indoor air.

To find out if your building is located in an area prone to elevated indoor radon concentrations you can view the EPA Radon Map.  Buildings located in Zone 1 counties (red colored) have the greatest potential for elevated radon, followed by Zone 2 (orange) and, finally, Zone 3 in yellow.

Two easy ways to start 2011 off on the right foot -- follow the EPAs recommendation by eliminating two significant and relatively easy IEQ concerns, PCBs and radon, from your building.

Have you participated in a state or federal lighting retrofit program? Did the electrical contractor find anything suspicious? How easy was the process? And, have you tested your home or office building for radon? What were the results?
END_OF_DOCUMENT_TOKEN_TO_BE_REPLACED
0 Comments Click here to read/write comments