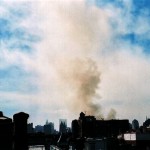 The connected lifestyle and technology of todays standards help us accomplish many tasks and stay informed.  We are all used to checking our phone or bringing up a website to learn more.  This same connection through real time monitoring to hazardous work sites would be second nature to most and allow for the protection of many.  My hope is that there will never be a need for real time monitoring in response to an incident like 9/11 but, as an American and a CIH working at hazardous sites; it is reassuring to know that there are developed technologies in place to better protect workers if the worst does indeed occur.
END_OF_DOCUMENT_TOKEN_TO_BE_REPLACED
0 Comments Click here to read/write comments

If real-time, reliable data is available to help you make good, solid decisions, get it and use it. You will do a better job and make fewer mistakes. Information is power and you can NEVER have too much of it.  How have you used TMI to develop a better project or framework?
END_OF_DOCUMENT_TOKEN_TO_BE_REPLACED
0 Comments Click here to read/write comments