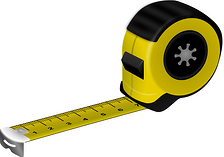 It had appeared that Mr. Anderson arrived at the construction site just before 9 a.m. the morning of the accident when the tape measure fell about 400 feet—seemingly as he was exiting his car—hit a piece of metal a few feet higher than Anderson’s head, then bounced to strike his head.  Anderson was rushed to the hospital but died within the hour.

However, accidents from falling objects happen on construction sites quite frequently. The required practice—mandated by OSHA—is to visibly mark areas where this type of hazard exists as a Hard Hat Required Area.  A supervisor for a contractor working on the project said such safety protocols were in place at this site and everyone was required to wear a helmet. Unfortunately, Mr. Anderson left his safety helmet in his truck, leaving his head unprotected.  He risked taking a shortcut and paid the most costly price ever.

Each day in this country, there are almost 6.5 million people working on construction sites. These work places are inherently dangerous due to hazards such as falling objects, heavy equipment, electric power lines, open trenches, scaffolding, power tools and more.  There are more fatal injuries in the construction industry than all other industries.  Preparation and vigilance to the hazards is a job requirement and there is no room for shortcuts, even for a few seconds.

Emilcott has been helping our clients with Construction Site Safety for over 25 years. We can assist with program development, employee training and site safety oversight.