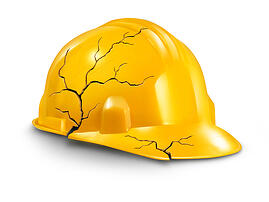 On March 10th, New York City Buildings Acting Commissioner, Thomas Fariello, announced that 2013 saw a 62.5% decrease in fatal construction-related accidents when compared to 2012.  That is a significant decrease. There were 8 fatal construction-related accidents in 2012 and three in 2013.  However, all three fatal accidents were caused by worker falls due to lack of adequate fall prevention and protection at the job site. This too is very significant—and tragic, as every one of those deaths was preventable!  NYC could have had a 100% decrease if only proper safety measures had been taken.

The three construction-related fatalities occurred in Queens, Brooklyn and Manhattan.  In Queens a worker fell and died in January 2013 during the installation of a steel beam at a construction site. An investigation suggests that proper pre-task planning prior to the steel beam’s erection was not thoroughly completed.  In May, a worker fell while doing work (without permits) on a home in Brooklyn.  Scaffolding had not been used to facilitate working at elevated levels, nor was the worker wearing a safety harness.  Finally, in November, a worker died from injuries sustained from a fall from a supported scaffold in Manhattan. The Department’s investigation showed that the scaffold was improperly installed and had missing planks, guardrails and handrails.  All of these deaths were caused by side-stepping essential and easily implemented safety procedures.

Mr. Fariello is touting that the decrease in construction-related fatalities is a direct result because of the Department’s“… outreach to the industry about the importance of worksite safety, combined with tougher enforcement”, which he states “has had a significant impact on construction operations in New York City”. The Buildings Department has dedicated specialized enforcement units to address site-specific safety concerns and prioritized pre-construction planning. It has also expanded its team of highly-qualified inspectors to increase its oversight of high-risk construction operations. The Department emphasizes that the drop in fatal accidents occurred during a period when the City saw an increased in construction permits—up 29% in 2013 over 2012.

It should be noted that while fatalities decreased, the total number of reported construction-related accidents rose by 5.7% from 2012 to 2013, and the total number of reported construction-related injuries 4.3 % during the same period. The Department attributes this rise to the increase in accident reporting by industry members—an actual goal of this latest initiative.  The school of thought follows that accurate accident reporting will assist the Department (and the industry) in identifying operational trends on construction sites and new ways to improve construction safety practices. In 2013, the Department issued 5,812 full and partial stop work orders in response to reports of unsafe construction conditions.

In response to the preventable fatalities in 2013, Acting Commissioner Fariello stated, “….these accidents should serve as a reminder that we need to keep up the pressure when it comes to safety. As building increases across New York City’s neighborhoods, we must remain diligent in our enforcement and in finding new ways to keep workers and New Yorkers safe.”

In addition to its increased enforcement, reporting and inspection, the Department has implemented more than 25 new construction safety laws since 2008 and NYC became one of the first cities in the world to accept and review 3D site safety plans for construction operations and approvals. Other efforts include:

On a related note, on March 19, 2014, OSHA announced a national safety stand-down from June 2 to 6 to raise awareness among employers and workers about the hazards of falls, which account for the highest number of deaths in the construction industry.